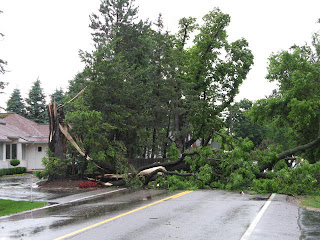 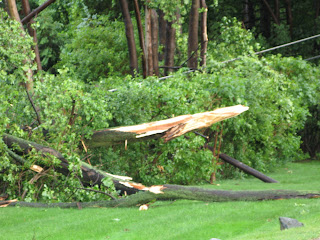 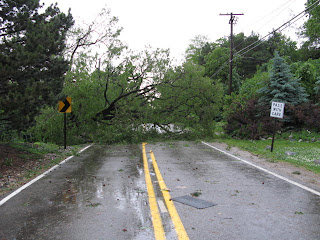 It's been a tough week in Michigan. On Sunday, a major storm moved in and took down branches, entire trees and telephone poles. We were visiting friends nearby, and taking a tour of their lake in their boat, 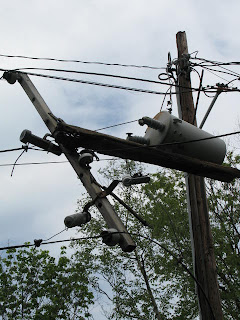 when the sky turned dark and threatening. We quickly returned to shore and secured the boat, but not quickly enough to avoid a soaking.

Power went out at their home, but fortunately they had a generator that quickly restored basic functions - lights and television! 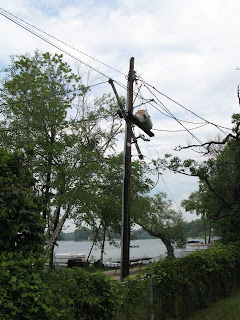 When returned home, we found our street blocked by huge downed trees. Fortunately, we were able to get into our driveway. Although we have a generator, it wasn't working (let me accept fault here...it needed a new battery and I hadn't taken care of it). 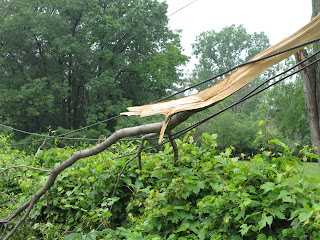 That night we retired to our dark bedroom with flashlights, candles, and a camping lantern.

The next day, I tried to jump start the generator, using a car battery. I succeeded...in blowing up the old generator battery. So I went out and bought a new battery and installed it. Eureka! The generator worked! It powered the freezer, refrigerator and hall lights. Unfortunately, no plugs, kitchen or bedroom lights. So another two nights with the candles and lantern.


Finally, our electrician Glenn came over and attached additional lights and plugs to the generator, allowing us to eat in the kitchen and watch DVD's (no phone or cable TV yet).

The days went by with no change. Teams of DTE (electric company) roamed the area, ignoring our problem. We had live wires on the street and lakefront. DTE did assign some office workers to direct traffic in front of our house and around the live wires. But the traffic directors had no idea when power would be restored. 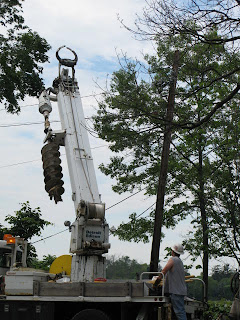 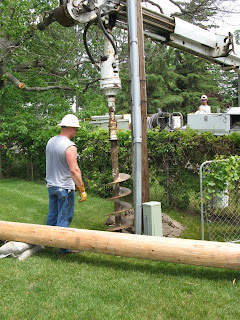 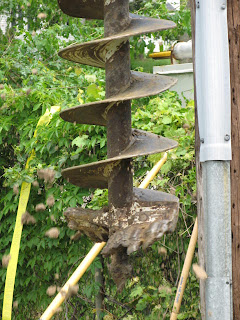 A pole was delivered. On Wednesday. 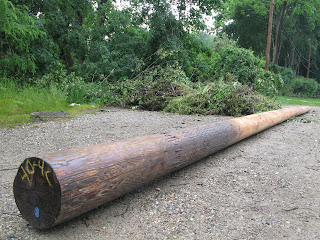 Limbs were cut down. On Thursday. 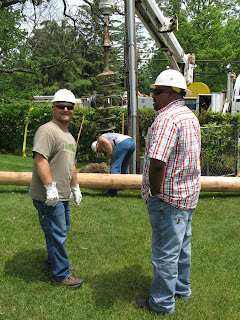 Finally, on Friday, the new pole and transformer were installed and we were promised service by 3 pm. About 6 pm it actually happened.

So, what did we learn?
1. Camping out is only fun when it's by choice
2. It's not romantic to be marooned in your bedroom after dark
3. Keep the battery in your generator charged and check it regularly 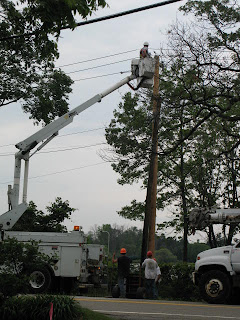 Not that we have much to complain about. Detroit doesn't normally get floods, earthquakes, hurricanes and other natural disasters. An occasional storm (rain or snow) or tornado is about it. So although we may not literally be living in paradise, there are some compensations for midwest life. 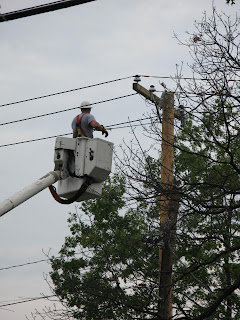 Posted by The San Miguel News at 3:27 PM