My Expedition with Eric 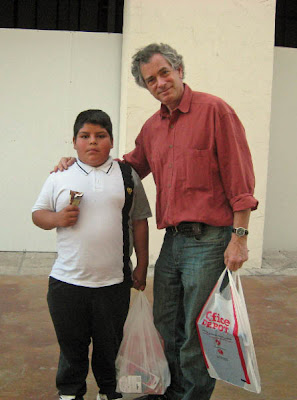 Our housekeeper, Mari Jimenez Garcia, has two children, Eric, 9 and Donna, 14. She is married to Martin, who works for the water company in town (SAPASMA).

At holiday time in Mexico, gifts are given to children not on Christmas, but on Three Kings Day (Dia de los Tres Reyes), which is January 6. 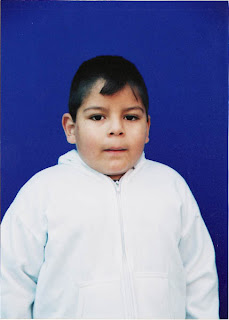 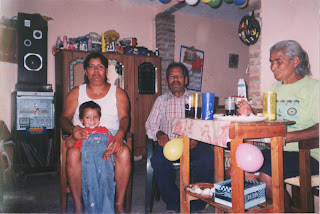 Eric at about 2
with his mother and grandparents 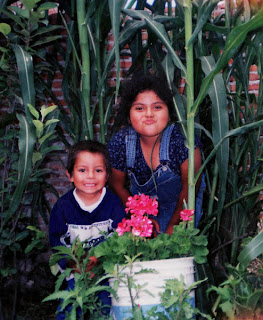 Eric and his sister Donna about 5 years ago

This year I asked Eric what he wanted as a gift from us, and he told me that he needed some school supplies. Not very exciting for a 9 year old. So instead, I decided to take him on a shopping expedition with me to some stores he normally would not visit.

Eric is a shy boy (timido in Spanish). It is very difficult for him to ask me, a Gringo for whom his mom works, for anything, so I had to approach him rather gently. I made a date to pick him up, and in the car (already pretty exciting for a Mexican boy), we started talking about life and school.

He told me that he isn't doing very well in school, and that his teacher calls him a dummy (burro) when he doesn't know the answers to questions. Obviously, this is the kind of thing that used to go on in the US, but not much these days (hopefully). Talk about low self esteem! I tried to tell him that he wasn't stupid, and in any case, his teacher had no right to say that, but try explaining that in broken Spanish to a 9 year old.

We arrived at our first destination - Mega - a large (for Mexico) department store and grocery. We scoured the aisles for a backpack and school supplies. Relatively low quality and high prices, I thought. Eventually we found a satisfactory backpack. However, Eric inspected it and found a tear in it, so we searched further until we located a pristine example. Then, on to the toy aisle, where Eric, after intense thought, picked a remote control car. 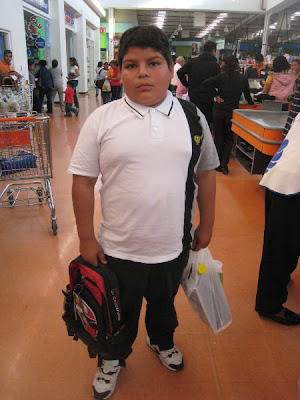 Purchases in hand (or rather, on back), we exited Mega. Eric was still pretty shy with me, and had a hard time talking to me freely. However, I peppered him with questions in order to get him more comfortable and open with me. 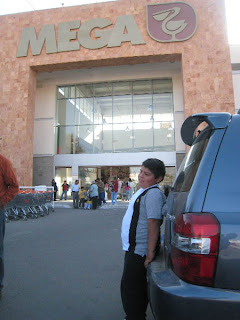 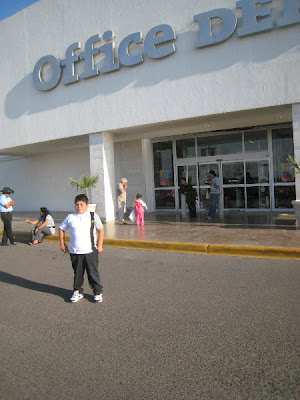 I think (hope I'm not projecting) that Eric was now feeling more comfortable with me. Note that he is even smiling in the picture at the Office Depot cash register. 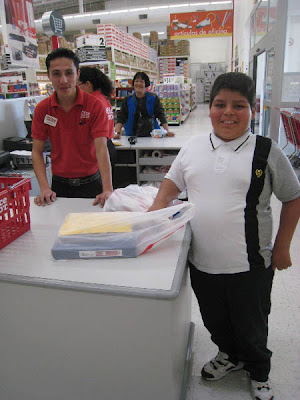 What's an expedition without food? Our next stop was the food court, where we bought ice cream. Like young boys everywhere, Eric managed to get a fair amount on his face and his shirt! 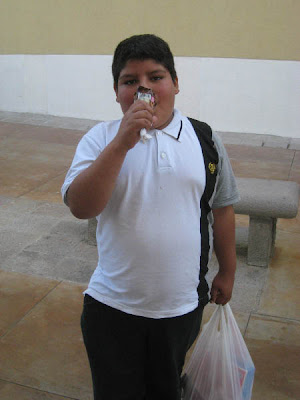 On the way home, we had a heart to heart conversation. I asked Eric about his friends, and he told me that he didn't have any because he was fat. Again, my heart went out to him. I told him that wasn't fair, and suggested that he try to eat more healthy foods, and that I would speak to his mother about this. By now, he was more open with me, and we discussed other subjects (to the best of my meager Spanish ability).

I dropped him off, and he thanked me and proudly showed his mother his new acquisitions. Mari told me the next day that he was really happy with his school supplies, which were of such good quality.

So where do I go from here? Do I have further responsibility for Eric? For his weight? For his problems in school? It's one of the Gringo dilemmas in San Miguel. How involved do you get with the family of your employee? Stay tuned.
Posted by The San Miguel News at 3:37 PM