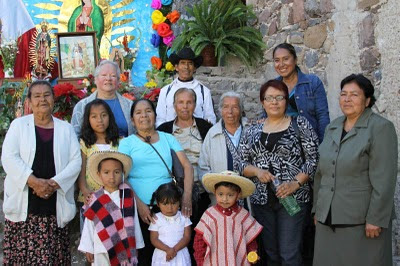 Another story. Before the Christmas season began, Mexicans join together for the festivities of the Virgin of the Guadalupe, the most venerated and important day of the year. Celebrations abound all over the country, beginning In the early morning hours (starting at about 4am) with fireworks, which is something we never quite understand. They can’t wait until let’s say 8:00 am? Over the years we have learned that the Mexicans do love their fireworks no matter what time of day.
Like the rest of Mexico, the people of San Miguel celebrate this day with local neighborhood posadas (celebrations), religious masses, building altars, and gathering with friends and family to share comida. (lunch).
We were home that particular Sunday morning, watching Sunday morning news, having a nice breakfast, and just enjoying the quiet when we heard what sounded like a marching band coming down our street. Grabbing the camera and our curiosity, we followed the 15 or so young people who were in full dress marching band costumes. Quite a crowd of people followed the procession, many of whom were older women carrying individual statues of Guadalupe. At the top of the hill, all stopped before an enormous altar with a very large portrait of the Virgin, decorated with large paper flowers in glorious colors, candles, additional flowers and plants, small statues, oranges, and greens. 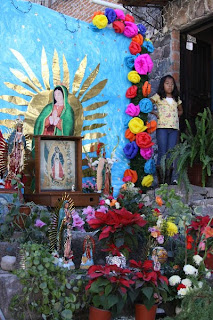 It was spectacular to see it on the street. As we were the only gringos, I asked permission (a courtesy) to take a few pictures. The people were both pleased and eager to have their photos taken.
As I was stumbling through my conversations with “my better than what it used to be but still not so great” Spanish, an older Mexican woman came over and introduced herself to me as Aurora Gutierriez in English.
She told me the story of this particular posada, that it had been a tradition for 15 years between a group of friends, expanding each year with more extended families and friends. Each of the small group of women who were the organizers had their roles: one ran services, one created the altar, others cooked for the comida (lunch), etc. Aurora asked me to take a photograph of the group of women who were the organizers, and after a few minutes, insisted that we be part of the photograph too (including Bella!). Other families asked me in turn to take their photographs. As an added bonus, we were invited as special guests to their comida, which was a great honor.
While they were conducting the service, we went back to our casa and made about 30 prints, and returned to the celebration with photos in hand. 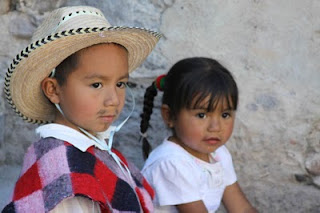 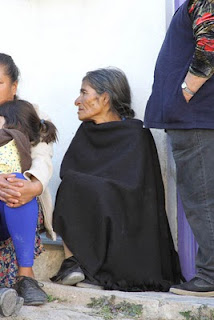 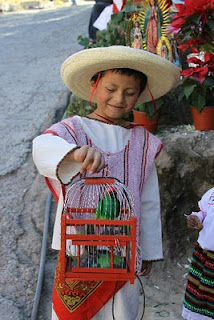 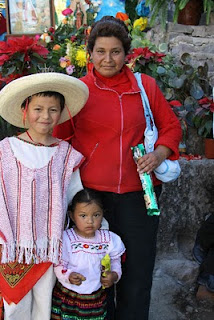 By this time, prayers were almost over, so I presented the envelope with the photos to Aurora. As everyone gathered about to see the pictures, I realized another reason why we are here in Mexico. It is opportunities like this that remind us of our own humanity, that giving something back to the community with a simple thing as taking a photograph can give us the greatest sense of joy. We were included as part of this group, no matter who we were, what religion we were, what was the color of our skin. As we were welcomed into our neighborhood posada, this was indeed “un regalo”, a gift for all of us. 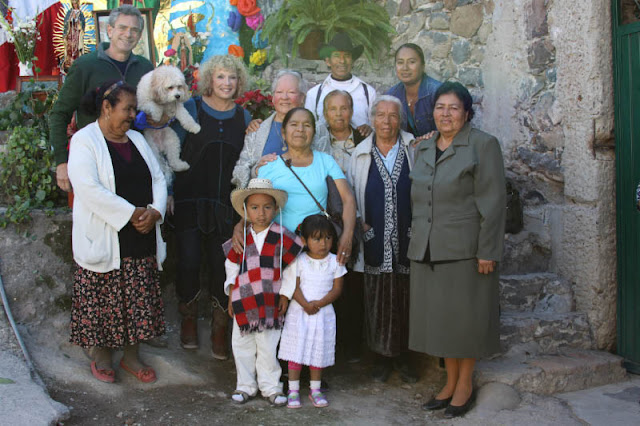 Posted by The San Miguel News at 6:29 PM

We saw your photo on Google Images and are wondering if we may have permission to use your photo.

We are currently working on a project for which we need pictures of local festivals and events in San Miguel de Allende. The photo(s) will be published on our website event calendar.

Please let us know if this will be okay with you.