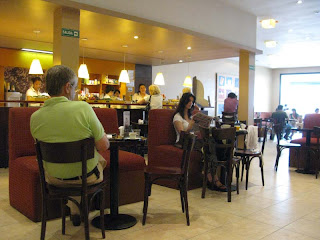 Remember, we're still on Monday, the first day Linda worked in the studio. After dropping her off at the studio, I left to take a walk and explore the neighborhood.

When I left the studio, I walked to the main street and had a coffee at Havanna, one of the branches of the ubiquitous chain. Using its Wifi, I surfed the web for a while, and then proceeded with my walk. 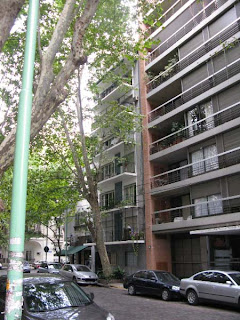 As I've written, Belgrano is upscale residential. It ranges from lovely, large mansions to small apartment buildings. There are a lot of shops, cafes, parks, etc. Little if any poverty is visible. 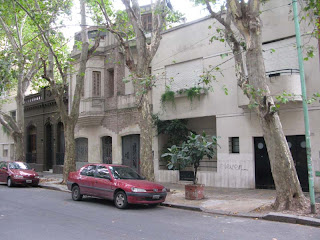 As it was midday, there were not a lot of people on the street. However, it was far from empty, given the shops and cafes on virtually every block. 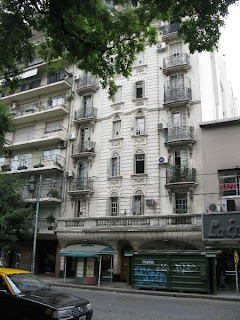 Some of the buildings reminded me a bit of Paris. And, as you all know, Buenos Aires is sometimes called "the Paris of South America", although not, I imagine, by Parisiens (just as Harvardians do not call University of Michigan "the Harvard of the Midwest", but that's another story entirely....) 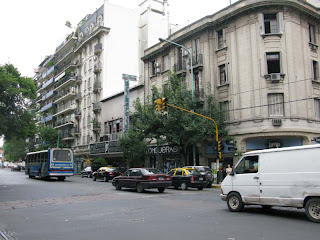 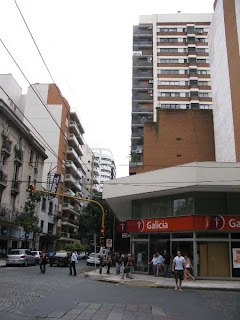 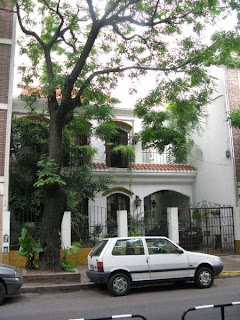 This scene is repeated all over the neighborhood. I have heard that dogwalkers here can earn 5000 pesos a month, more than $1000 USD, quite a good wage here for unskilled labor (no insult intended...I couldn't do it). I count 13 dogs in this photo. I also heard that the dogwalkers sometimes go to a park and let the dogs roam a bit; however, one dog is the chosen leader, and keeps the back together. I doubt whether the leader dog picks up the dog poop; nor do I think this woman feels that it is part of her job! You must be sure to look down when walking around BA. 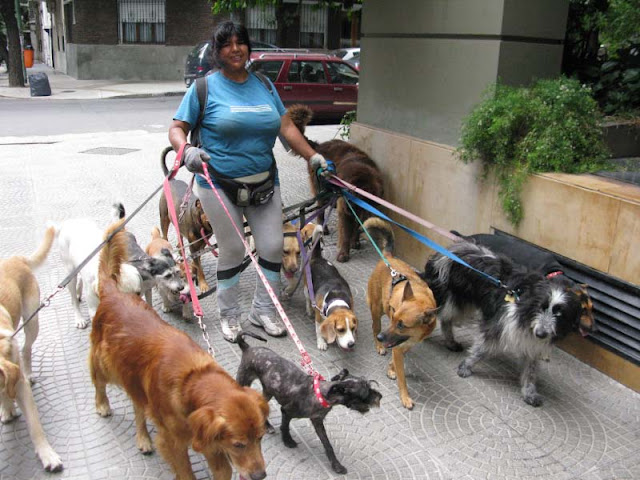 After a few hours of walking, I was tired, and found a small Peruvian restaurant in which to eat lunch - ceviche (raw marinated seafood) and beer. The beer was listed as a Porron, which I thought was a brand. I later learned that porron simply means a normal sized bottle of beer, and doesn't refer to any specific brand.
By the way, the major Argentinian brewer is Quilmes. Their beer is ubiquitous, and much of it is dark, called Bock. 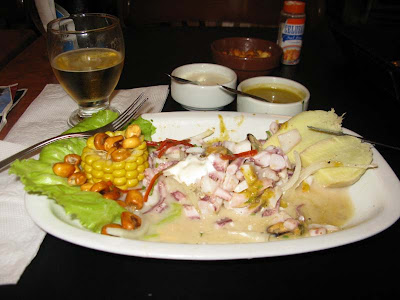 The ceviche was delicious, with a side dish of corn on the cob, corn nuts, and baked potatoes (or some delicious related root vegetable). Two sauces were provided - a cream sauce and a mustardy sauce - and both were spicy and delicious.

BA has a population of over 12 million people, including almost half a million Jews. This neighborhood is full of synagogues (all with security) and Jewish shops, such as the one below. 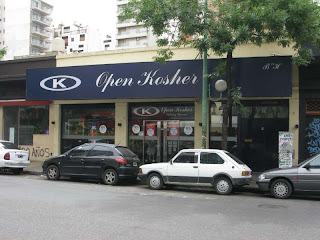 I decided to do something cultural, and went to the museum Sarmiento, in Belgrano Square. Sarmiento was a 19th century president of Argentina, and also served as an ambassador to the US during Lincoln's term of office. I think he knew Lincoln. He also received an honorary doctorate from the University of Michigan...quite a coincidence. Several other museums in the neighborhood were closed, this being Monday. 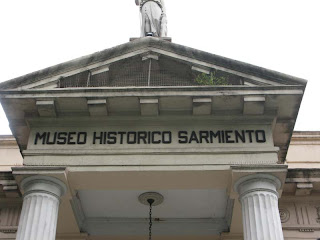 Next door to the museum was a lovely plaza with an ice cream (gelato) shop and a restaurant. I didn't stop there, but noted it for a return visit with Linda. 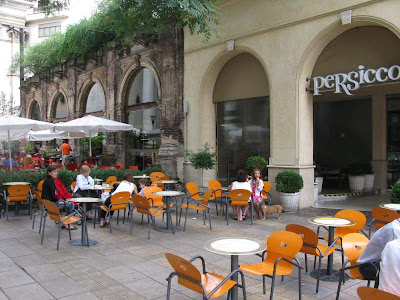 Instead, I went to a bakery, to purchase some things for the apartment. We could definitely use an Argentinian bakery in San Miguel or in Detroit! 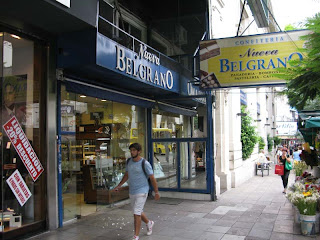 Very European style service. Order at counter and pay at another place. 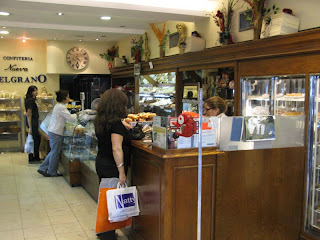 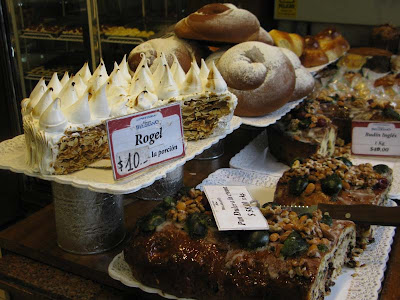 Couldn't you just inhale them? 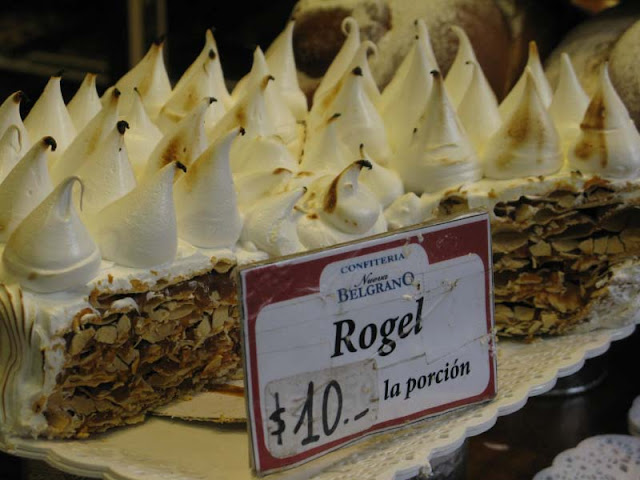 The baked goods I purchased were as delicious as they looked, to which Linda can attest!
I meandered hoome, passing this lovely apartment building a block away from our pad. It has a large inner courtyard, which was only partially visible from the street. 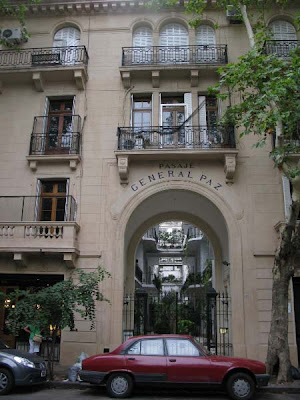 Home at last! The gated entrance to our small apartment building! Hasta luego for now, or, as they tend to say here, ciao! 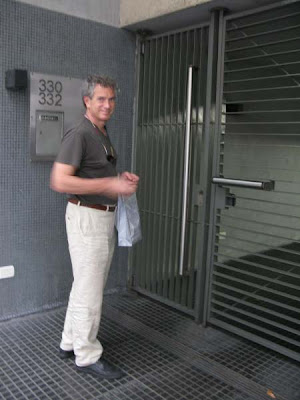 Posted by The San Miguel News at 7:52 AM